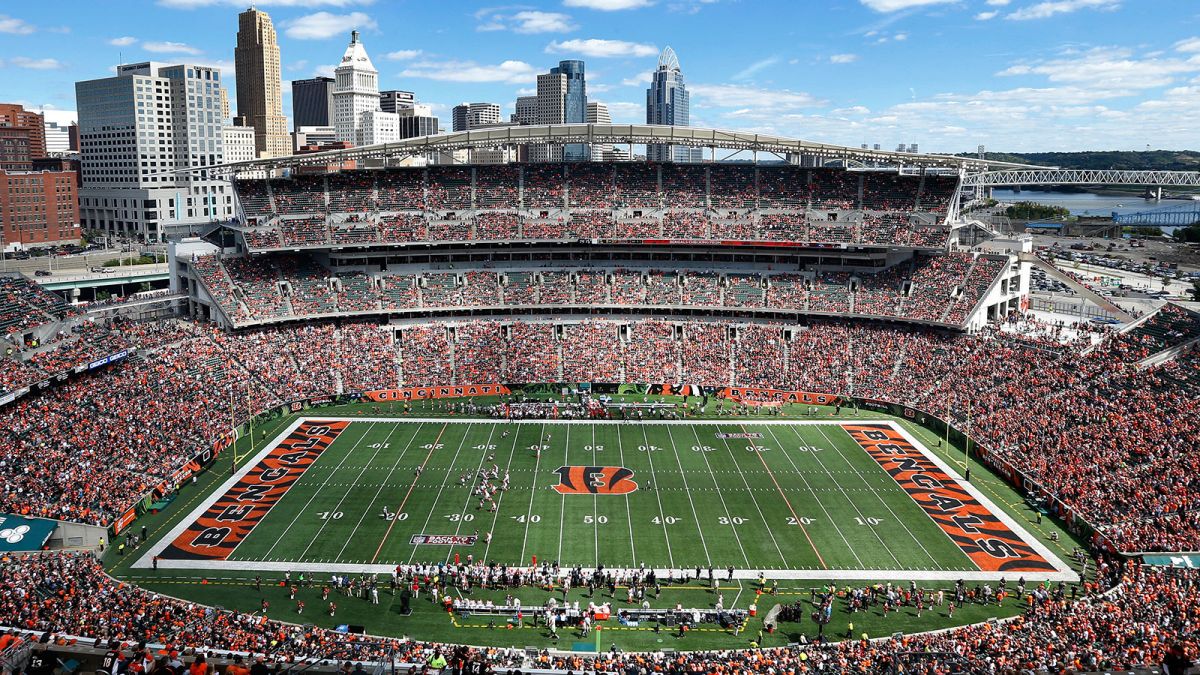 Paul Brown Stadium is the home of the Cincinnati Bengals of the NFL, located on Cincinnati’s downtown riverfront, Ohio. PBS, as it’s known for short, opened on August 19, 2000. The stadium was christened with a preseason contest vs. Chicago, a 24-20 Bengals win.

Named after the NFL legend who happens to be the Bengals founder, chief executive and first head coach, Paul Brown, the stadium has won numerous honors and has helped keep Cincinnati in the national sports spotlight. However, the Bengals have hosted four NFL playoff games at Paul Brown Stadium, with no victories.

In 1996, Hamilton County locals came together to passed a 1.5% sales tax increase to fund the building of two new home venues for both the Bengals and Cincinnati Reds (a Major League Baseball team). Previously, the Bengals and the Reds shared tenancy of Riverfront Stadium (Cinergy Field), but both teams complained about the arena. Riverfront Stadium is an aging multipurpose facility that lacked modern amenities and other things necessary for small-market teams to survive.

For its first four years, the field was natural Kentucky Bluegrass, but maintenance problems arose. At one point in those four years, Paul Brown Stadium was rated as the third-worst field in the league. Hamilton County had no choice but to explore other options prior to the 2004 season. Lastly, they chose the synthetic FieldTurf system. Since the field markings are sewn into the fabric, repainting between games is unnecessary and, it feels like real grass. This reduced maintenance saved Cincinnati County approximately $100,000 annually. Furthermore, with the change of turf, Paul Brown Stadium is opened to other uses without worry of damage to the turf.

One more unique feature of the field is that it is one of only two stadiums in the NFL to have “five miles of piping” running under the field to keep the rubber inlays heated. In April 2012, the stadium upgraded the playing surface with an installation of Act Global synthetic turf. Again, in 2018, the stadium went through another upgrade by installing a new top-of-the-line synthetic turf system. The stadium features a sleek design and blends seamlessly with the city, open to views of downtown to the north and the Ohio River to the south.

National recognition for Paul Brown Stadium has come in various modes. One of the most notable recognition was in 2007. The stadium was the only football stadium to make a Harris Interactive list of “America’s favorite 150 buildings and structures” that year. Additionally, Paul Brown Stadium ranked 101st on a list whose range included all manner of major structures — skyscrapers, museums, churches, hotels, bridges, national memorials and more. Cincinnati Enquirer columnist Paul Daugherty wrote: “The place is gorgeous. If the Bengals were trying to butter me up by giving me the tour, it worked. Every seat is good.” He wrote this statement after taking a tour of PBS in June 2000, two months prior to the first game.

Quoting Mike Brown, son of Paul Brown and the club’s chief executive since 1991:

“In the best stadiums, the experience of just walking in wakes you up. It’s exciting just to be there. From day one, we made this a goal for our stadium. We want it to be the best setting for pro football in the country, and we think our fans will agree that it is.”

Though proud of PBS’ much-hailed outer design, the Bengals are prouder still that the stadium has fulfilled a primary goal of serving as a premier venue for watching football. Almost 70 percent of the seats are along the sidelines, positioned for the best possible sight lines to the action. PBS also serves as a link to the past. In an era when many sports facilities carry corporate names, Cincinnati’s stadium bears only the name of Paul Brown.

Some other events that have been held in the Paul Brown Stadium are concerts. The stadium hosted concerts by Kenny Chesney, Tim McGraw, Fantasia, Robin Thicke, Demi Lovato, Luke Bryan, and Guns N’Roses. Another non-football event that takes places every spring in the arena would the annual Queen City Classic Chess Tournament.

Fans can rejoice to know that the Jungle Zone, a pregame event located in the Southeast corner on the Plaza exist!

The event begins three hours prior to kickoff and ends at the start of the game. It is suitable for young and old.

The Jungle Zone consists of the following attractions:

Ticket Policies:
Read up on the ticket guarantee and our chosen ticket marketplace on the Paul Brown Stadium tickets page.